I met my future husband at my (our) place of work in April of last year. After some pretty intense coaxing, I got him to date me and in April of THIS year, he asked me to marry him. 🙂 🙂 🙂 We got engaged out by the Adler Planetarium in Chicago – the same spot he first asked me to be his girlfriend. It was perfect! Not a lot of fuss, nobody watching, just us and our beautiful city skyline watching in the background. 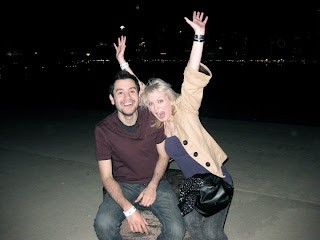 About 5 minutes after he popped the question.

After an impromptu engagement party, I got straight to planning. Much to my dismay, I just as quickly discovered how expensive a wedding really is. It doesn’t matter how simple you are willing to go (I’m pretty willing), it is NOT CHEAP. Since I have a mountain of college debt, our budget became our top priority…well, second in the priority line after becoming husband and wife, that is. 😉

Here are the things we are not willing to budge on:

Everything else is flexible.

I know that I can come in at (or under) our budget of $8,000 for a lovely, unique May 7, 2011 ceremony & reception. Hopefully, with enough crafting and bargain-hunting, I can even fit the honeymoon in for that amount! ::crosses fingers::

Being that I have only 10 months and some change to figure this out…. LET’S PLAN!